Making fundraising a family affair, Brunel and his son Theo are working up to their first fundraising challenge event together!

What is your aim?

To complete a number of crazy challenges to raise £50,000 for St Mark’s Hospital Foundation

What events have you competed in so far?

Those of you that have been following me for the last few years will probably be bored of my updates but just as a summary, I have already competed in multiple IRONMAN events, over 25 triathlons and qualified to represent GB in the cycling world champs.

At the beginning of July 2018, I spent a week up Alpes D’huez in the French Alpes with 2000 other people from 37 different countries competing in the Megavalanche and well….I’ve simply returned battered and bruised and with my bike in literally pieces.

This year, this particularly region had experienced more snow than usual and as such, the first 4 miles of the race was covered with almost perfect hard packed snow and ice. This was perfect in the sense that you could get down the snow very quickly and by quickly I mean speeds in excess of 70 mph were very easy to achieve. Whilst this meant that a racer would get past the snow line very quickly it also meant that if one were to get it wrong it would certainly mean being airlifted off the mountain and this is exactly what I saw…plenty of broken bikes, bones and riders.

Qualification went well and I somehow ended up on the first line of the grid alongside all of the professional riders that added to nerves of the race itself.

Race conditions were absolutely perfect for the main race and on race day I made it down past the snow line in under 5 mins and feeling confident as I was in the top 10 but unfortunately I had a heavy crash entering the first rock garden; I don’t know what exactly happened but following on from this crash I was left with a destroyed rear wheel which rendered my bike unrideable. This simply left me with two options, pull out of the race or run down to the bottom. Those that know me well, know that pulling out of a race is simply not an option for me so I proceeded to run the equivalent of a half marathon down the mountain, with a broken bike dropping down 8000ft in decent. This in itself took me the best part of 4 hours and I ended up stone cold last in the race. I know at one point I had the medical helicopter following me to make sure I was ok but none the less I made it down to the bottom finally, emotionally and physically drained but happy that I had finished. 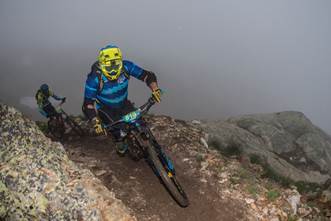 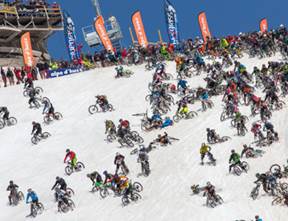 On 5th August, I was in the Yorkshire Dales taking part in the “Ard Rock Enduro” event which is billed as the hardest Enduro race in the UK with over 2500 competitors taking part. It has this name because of the unique landscape (ie its very very rocky!) and gradient of this part of the Yorkshire dales which is  very “alpine” in nature and makes it an excellent venue for Enduro and Downhill Mountain biking. The event itself was based on 7 timed downhill sections with absolutely brutal transitions in between the various stages. The event covered over 45km but with over 6000ft of climbing and the same in descent so I was quite simply broken by the end as the whole thing took the best part of 6 hours to complete . Happy to report that this time around my bike survived and I ended up in the top 20% of racers so very pleased with my result. 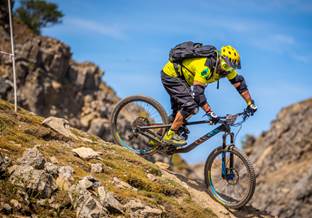 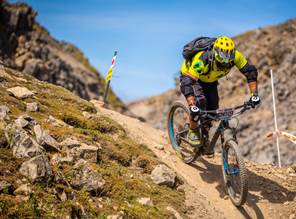 Some 4 years ago, I set myself a very ambitious and somewhat crazy target of raising £50,000 for the St Mark’s Hospital Foundation. This is the only recognised charity that raises specific funds for the research that goes into St Mark’s Hospital. I owe more to St Mark’s than words can describe as I have lost count of the number of times that they have saved and transformed the life of my wife Laura following the original birthing complications that Laura experienced. The research that St Mark’s is doing, if successful, will have a direct impact on my wife and her quality of life and hence there is no question with regards to my motivation in getting to my £50,000 target.

We understand this is becoming a family affair, tell us more!

My main event of this year is extra extra extra special because my son Theo who is 8 years old is taking part in his first triathlon, with me simply there for support. For some years now and since the age of 1, Theo has always supported me at my somewhat extreme sporting events and has always been eager to take part…. so now is his time.

What makes this such an inspiring challenge is that Theo has cerebral palsy but I know that no matter what, he will give it his all and complete this challenge – he has already overcome so much in his life already and is most definitely not one to give up on anything! 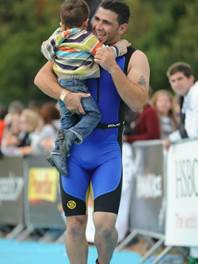 Our focus on Theo since he was born has always been around physio to get him walking so I am going to be pulling him in a boat through the swim leg for his own safety even though he could probably do the swim himself. He will then do the ride and run on his own with me trying to keep up with him as I know he is super-fast on a bike! The event that he is taking part in is rightly called the Super Hero Triathlon at Eton Dorney Lake on the 18th Aug. It’s big. It’s bold. It’s gutsy. It’s the UKs one and only disability sports series for the everyday superhero and was actually set up by an ex Paralympian and Wold Championship medallist. The event itself will attract many of the Athletes from the London Paralympics and is also due to also be televised on Channel 4 on the 1st Sept courtesy of Clare Baldwin. Its therefore not only the perfect setting for Theo to do his first triathlon but to try to raise the profile of what we are now both doing for St Marks!

So looking forward to this one!

Us too Brunel! Good luck to both yourself and Theo and we look forward to hearing all about it!

Want to find out more about Brunel’s upcoming events? You can follow his progress via his Facebook fundraising page here.

Inspired to donate? You can find Brunel’s (and Theo’s!) Justgiving page here.

Inspired to do your own fundraising challenge or event? Get in touch, we’d love to help: